Tree of the Week

Introduction: The Douglas Fir is an evergreen conifer that is non-native to the UK. It is native to North America and can exceed heights of 55m. They have a lifespan of 1000+ years.

Leaves: Green with white-green strips on the leaf’s underside. They are soft and flexible flat needle leaves that when crushed, release a sweet resin scent. 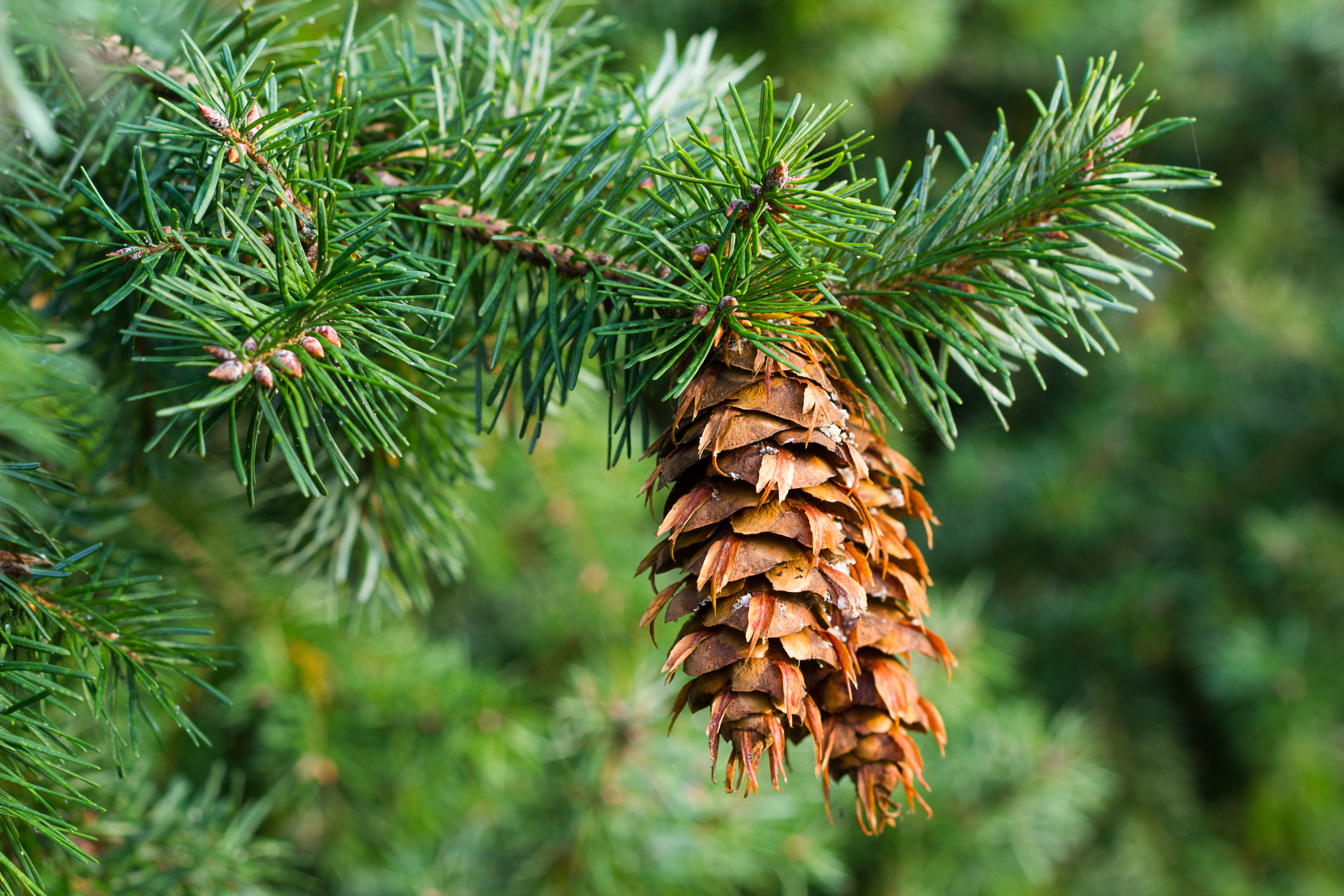 [Leaves and cone of a Douglas Fir]

Buds: Like those of a beech, they are red-brown in colour and are slim and scaly. They also taper to a point.

Bark: In young trees, the bark is grey-green and has strongly scented blisters. As the tree matures, the bark changes to a purple-brown colour and becomes thick and corky. It also develops fissures in a horizontal formation. The trunk remains with resin-filled blisters.

[Bark of a Douglas Fir]

Form: Medium to large trees and can, on average, reach heights of around 55m – however, it has been recorded that some Douglas Fur have reached 100m.

Douglas firs are monoecious (male and female flowers are both on the same tree). The male flowers (yellow stamens in oval clusters) grow on the underside of the previous year’s shoots. Female flowers grow in green to red vertical tufts on the tips of twigs. The wind pollinates the female flowers and transforms them into oval cones. These oval cones change from yellow to pink to light brown in colour and hang directly down from the tree’s branches. Each scale has a unique three-point bract.

Found in a variety of habitats but mainly open forests. Thrive in rainy conditions.

Douglas Firs came to the UK in 1827 and are non-flammable due to its bark. The trees are native to American, and Native Americans once viewed the unique cone bracts as the tail and back legs of mice as they believed that mice hid in cones to escape from forest fires.

These trees have an extremely long-life span meaning mature trees often develop deadwood cavities which can act as a shelter for bats and birds. They are also tall trees which makes them a perfect nesting site for larger birds of prey including buzzards and sparrow hawks. The leaves and seeds of the Douglas fir are also essential to wildlife. Spruce carpet and dwarf pug moths feed on the leaves and finches, and other small mammals feed on the seeds. Additionally, in Scotland, Douglas firs provide valuable habitats for red squirrels and pine martens.

Properties of Douglas Fir wood and its uses:

Douglas fir wood is strong, hard and durable, which makes it valuable as a softwood timber. It has high commercial importance, and it used to make beams, veneers, furniture, cladding, decking and flooring.

Styling of Douglas Firs/Where to Find Them:

Typically found in the west of England as this is where rainfall is the highest. Douglas Firs are typically grown as Christmas trees.

Unfortunately, the Douglas Fir can fall subject to many fungal diseases. It is most commonly affected by Annousis root rot, Armillaria root rot, Cystopora, upper-stem cankers, and damping off. It also has its own parasite – dwarf mistletoe (Arceuthobium douglasii “Engelmann”) and is affected by diseases like Rhabdocline needle cast, swiss needle cast and sudden oak death.

Pruning and Pruning Qualities: Mature Douglas Firs typically require little-to-no pruning; however, when it is needed, it should be conducted when the tree is in its most dormant stage. Douglas Fir’s main dormant stage is in early spring before new growth starts to emerge. It is encouraged that you removed any dead or diseased branches; including deadwood. As a general rule of thumb, you should never prune a Douglas Fir harshly as this can have adverse effects on a tree’s shape and appearance. You should also not use pruning techniques such as crown reduction because evergreen trees grow from a central leader. Lower branches should not be removed too. When a Douglas Fir tree is young, this is when you should remover weaker central leaders to encourage good growth as the tree matures.

Growth Rate After Pruning: Pruning of Douglas Firs can boost growth in terms of thickness and making the tree look fuller.